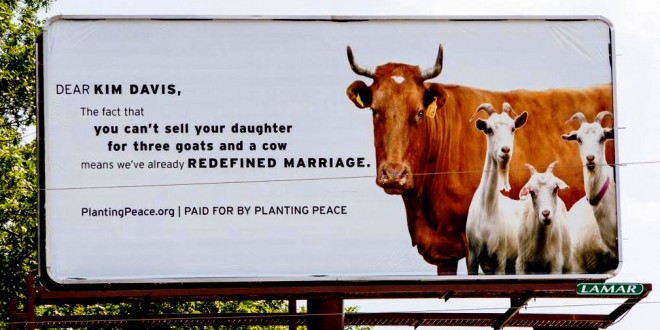 Anti-gay marriage clerk Kim Davis is about to get a rude awakening in her hometown. Non-profit organization Planting Peace just erected the above billboard in Davis’ hometown of Morehead, Kentucky. The message is plain and simple — if Davis is going to use Biblical rhetoric to justify her opposition to same-sex marriage, she might want to take a closer look at how else marriage has been redefined in relation to the book’s sacred teachings. Planting Peace is the organization behind The Equality House, the rainbow building that sits in direct opposition to the Westboro Baptist Church compound. In the past, the house, which was first painted the colors of the rainbow flag in March 2013, has played host to a child’s lemonade stand for peace, a gay wedding, a drag show and a fictional wedding between Dumbledore and Gandalf — all essentially on the anti-gay church’s front lawn. We hope you understand the Bible a bit better now, Kim!

What’s the over/under on how long it takes for the billboard to be defaced? Previous Rick Perry To Drop Out Of 2016 Race
Next Oath Keepers: The Liberty Counsel Doesn’t Want Us And We Won’t Be “Defending” Kim Davis From Rearrest