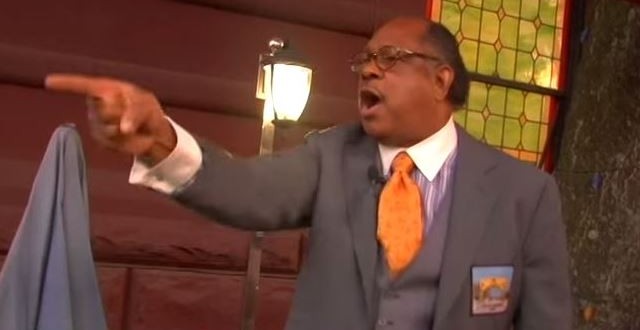 Hate Pastor James Manning Melts Down At Protesters: “You Sick Faggots And Lesbos Will Burn!” [VIDEO]

Hate Pastor James David Manning had a screaming, ranting meltdown on Tuesday night as Harlem Against Homophobia staged a protest outside his church. As activists chanted “Stop the hate now!” Manning climbed up on a chair to unleash some of his famous Christian Love™. “There is no salvation for butt-lickers and butt-bangers like you! You perverted faggots! You smell like rectums! I am the greatest preacher and defender of the word of God! Hallelujah!” All of this he proudly posted to his YouTube channel, which somehow has not been banned for hate speech. Manning’s church is listed a hate group by the Southern Poverty Law Center.

Previous Meanwhile In A Parallel Universe….
Next Louis Gohmert Has The Eric Fanning Sadz [AUDIO]