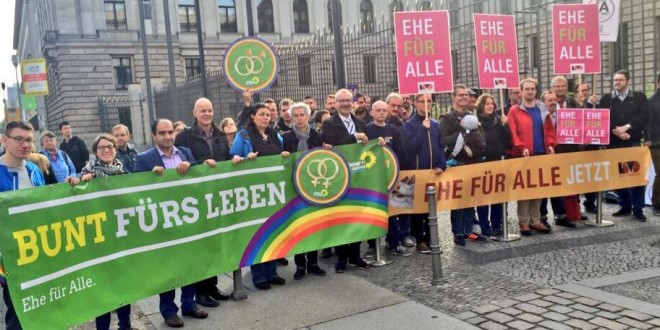 The German federal council (Bundesrat) on Friday approved a bill recognising same-sex marriage by a majority of votes from representatives of the country’s major political parties. The bill, which includes reforms to German civil law, was submitted by the governments of four federal states, which are dominated by the coalition of the Social Democrats, the Greens and the Left, EFE news reported. German Chancellor Angela Merkel has made clear in recent public remarks that marriage, for her, is the union of a man and a woman, but she acknowledged that there is currently a debate between other different views, even within her Christian Democratic Union party. The Social Democratic party is in favour of recognising gay marriage, although its legalisation was never stated before forming the coalition with Merkel.

The bill now goes to the popularly-elected 630-seat Bundestag, which is dominated by legislators from the Christian Democratic Union (254 seats) and the Social Democrats (193 seats.)

NOTE: A German-language report on today’s action is here.

Previous KENTUCKY: Clerk Casey Davis Says He’s Ready To Go To Jail Too But No Gays Have Asked For Licenses
Next Kim Davis Is Now A Republican