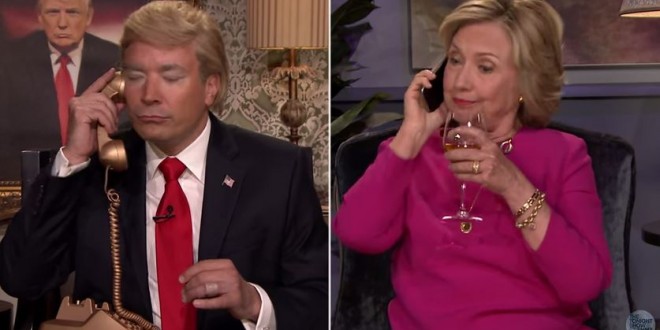 Hillary Clinton stopped by NBC’s “Tonight Show” on Wednesday where she was interviewed by Jimmy Fallon twice — once as Donald Trump, and once as himself. In what has become a trademark, Fallon donned the Donald’s signature hairdo and “called” Clinton at home to discuss women, immigration and Bernie Sanders. Fake Trump opened with, “I haven’t seen you since my last wedding.” Clinton fired back, “Well, I’m sure I’ll see you at the next one.” When Clinton asked “Trump” what his stance is on women’s issues, Fallon quipped, “I know a lot of women and they all have issues.”