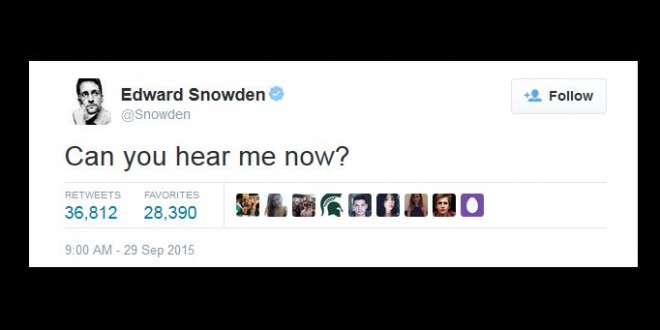 Edward Snowden isn’t just a hashtag anymore. The NSA whistleblower joined Twitter on Tuesday, using the @snowden Twitter handle. Snowden, who has lived in Russia since turning over a trove of top-secret documents to reporters more than two years ago, has remained in the public eye thanks to frequent appearances and interviews using video links and sometimes even robots. But joining the Twitterverse establishes him even more firmly as a major figure in the public discourse about surveillance and privacy that he jump-started in June 2013. The @Snowden handle had been taken by someone who hadn’t used it in three years. So Twitter was contacted, and agreed to turn it over to Snowden himself. According to Snowden’s lawyer, Ben Wizner of the ACLU, Snowden himself will be controlling the account. As of shortly after the launch of his new Twitter account, Snowden was only following one other account: @NSAGov. But @NSAGov was not — at least not officially — following him back.

Snowden has already begun engaging others at his feed.