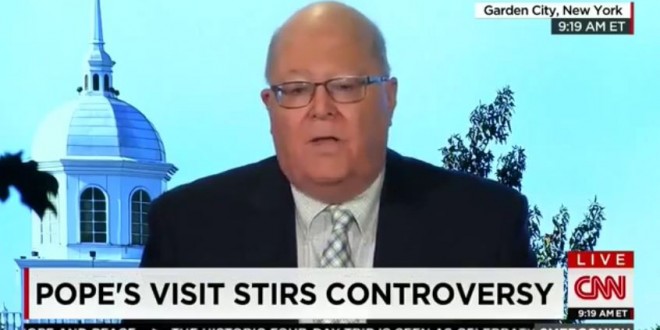 “It is so fitting that the least friendly administration to religion in history would invite a collection of pro-abortion nuns, Catholic gay activists, assorted dissidents and religious rebels to attend Pope Francis’ visit to the White House September 23. These include gay Catholic blogger Aaron Ledesma; Catholic gay activist and Church critic Nicholas Coppola; and Sister Jeannine Gramick, co-founder of the Catholic dissident group New Ways Ministry, who in 1999 was barred by the Vatican from working in ministry to homosexuals. Coppola and Gramick were both invited by GLAAD, which says the White House invited it and LGBT leaders to attend. Vivien Taylor, who identifies as transgender, not only scored an invite, but was told to bring some friends. He is—including members of Dignity, a Catholic dissident group, and other “transgender and intersex people.” Also attending is Gene Robinson, the first openly gay Episcopal bishop, who left his wife of 14 years for his male partner, then last year “divorced” that partner.”

Donohue took his complaints to CNN yesterday, where he declared that Pope Francis is like Bernie Sanders on the issues of climate change and income inequality, but is like Mike Huckabee on social issues.