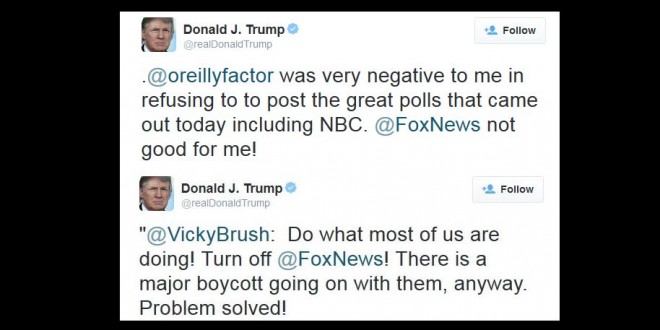 It looks like Donald Trump’s war with Fox News is back on. “I am having a really hard time watching @FoxNews,” the Republican presidential front-runner tweeted late Monday. The New York businessman, whose clash with Fox began after the Aug. 6 Republican presidential debate, later singled out talk show host Bill O’Reilly, tweeting: “Why don’t you have some knowledgeable talking heads on your show for a change instead of the same old Trump haters.” Trump didn’t specify who he was talking about, but O’Reilly’s guests on Monday included Trump critics Charles Krauthammer and Brit Hume. On the Today show Tuesday, O’Reilly told Matt Lauer, “I’ve known Trump a long time. He wants people to like him. When people criticize him, he takes it personally.” “That’s like the worst thing you can give Donald Trump is this tweeting thing,” he said. “I just think this is an extension of his reality show, The Apprentice. This is just theater right now.”

Previous Mat Staver: The ACLU Wants The Scalp Of Kim Davis To “Hang On The Wall As A Trophy”
Next Kim Davis: It’s A Privilege To Be Used By God To Impose My Religion On Unwilling Americans