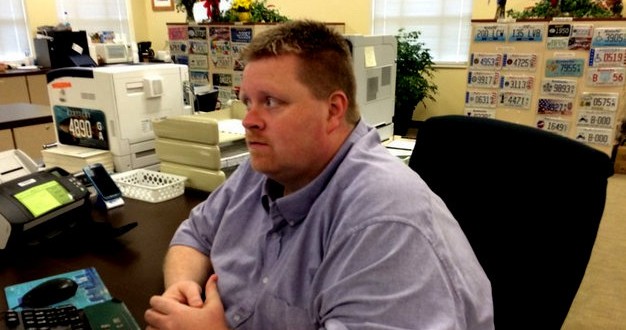 In an interview with Buzzfeed reporter Dominic Holden, Rowan County Deputy Clerk Brian Mason describes his boss as a “very sweet lady” who doesn’t hate anybody but who has put him “right in the middle” of a national controversy. Mason says that he will continue to issue marriage licenses “because of the judge’s orders and for personal reasons.”  Holden writes:

Pro-Davis activists protested outside the clerk’s office, calling for him to be fired. “Everyone has an opinion,” he reflected. “It doesn’t bother me.” Likewise, he said, mean-spirited, personal comments directed at Davis are “not necessary.” “She is very nice,” Mason said. “She is a very sweet lady. She has a good budget in. She’s good at her job. She doesn’t hate anyone.” Mason also tried to tamp down the idea that he is clashing with Davis, who has been portrayed by her critics as a tyrannical zealot lording over her staff. Although she did ban her staff from issuing licenses, upon returning to work on Monday, Davis said she would not interfere. Mason said there has been no tension between him and the rest of the office staff. Mason is equally low-key about his fans — people on Twitter and Facebook who praised him as a civil rights hero and for simply doing his job in hostile conditions. “I appreciate it,” he said of the adulation. “But it’s not necessary.”

Mason added that he is looking forward to things getting back to normal in his office. [PHOTO: Dominic Holden]