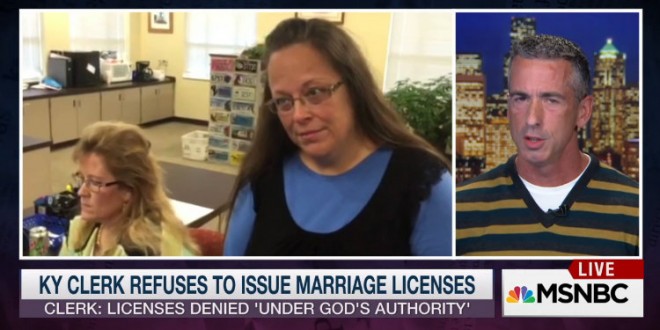 Last night Dan Savage appeared on MSNBC to declare that Kim Davis “will never have to an honest day’s work ever again in her life” due to her newfound martyrdom.

“This is a woman who’s been divorced three times and married four times,” he said, reading from the US News & World Report article that pointed out Davis “gave birth to twins five months after divorcing her first husband, (and) they were fathered by her third husband but adopted by her second husband.” “She’s now onto her fourth husband,” Savage said. “Jesus Christ himself in scripture condemned divorce, called it adultery and forbids it. Jesus Christ himself in scripture says not one word about same-sex marriage.” Savage said the U.S. Supreme Court had already decided the issue of same-sex marriage, and he said Davis clearly should have followed the law all along. “She’s not being asked to perform a sacrament, she is tasked with ascertaining that the people in front of her, the couple in front of her, have a legal right to get married and to provide them with that license,” he said. “She is not a minister. She actually thinks she works for God there in the county courthouse, when she actually works for Caesar — and someone needs to acquaint her with that fact.”

The clip below is classic Savage.

Previous REPORT: Wife Of Anti-Gay Alabama Gov. Robert Bentley Files For Divorce Over His Affair With Staffer
Next TRAILER: Macbeth