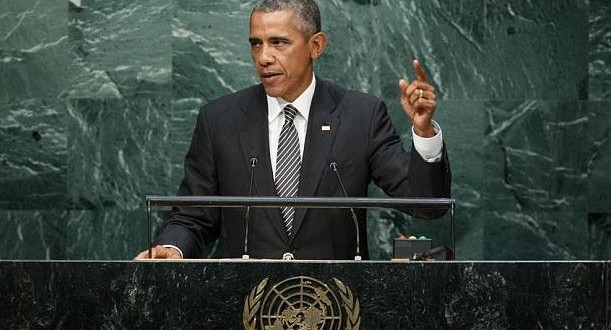 President Obama took on a confrontational tone in his speech this morning to the United Nations General Assembly, specifically calling out Russia, China and Iran for destabilizing activities in various world conflicts. Obama opened his speech directly decrying “strong states that seek to impose their will on weaker ones,” then alluded to Russian support for Syrian President Bashar al-Assad. “On this basis, we see some major powers assert themselves in ways that contravene international law,” Obama said. “We’re told that such retrenchment is required to beat back disorder, that it’s the only way to stamp out terrorism. In accordance with this logic, we should support tyrants like Bashar al-Assad.”

Despite the recent landmark agreement to curb Iran’s nuclear program, Obama called out the country for continuing to employ “violent proxies to advance its interests” in the Middle East. “These efforts may appear to give Iran leverage in disputes with neighbors, but they fuel sectarian conflict that endangers the entire region,” Obama said. “Iranian people have a proud history filled with extraordinary potential. But chanting ‘Death to America’ doesn’t create jobs or make Iran more secure.” Obama also took time to acknowledge past U.S. mistakes in involvement in historical conflicts, pointing to both Iraq and Libya as lessons learned, while defending use of military action against ISIS.

Below is the president’s full address.