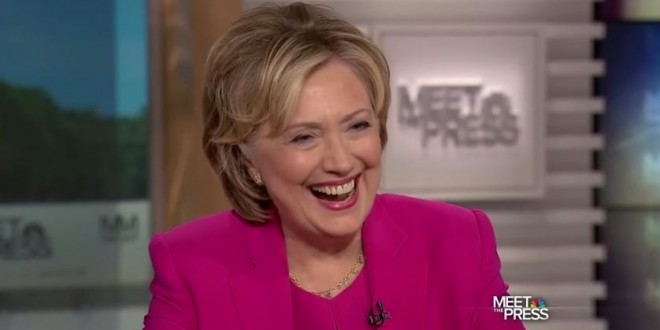 Clinton On Meet The Press: I Did Evolve On Gay Marriage But Now I’m “Thrilled” It’s The Law [VIDEO]

Yesterday on Meet The Press, NBC’s Chuck Todd grilled Hillary Clinton on several policy flip-flops including same-sex marriage, prompting the Democratic front-runner to say, “On same-sex marriage, like a lot of people, including our president, I did evolve. And I was not raised to even imagine this. And I’m thrilled now that it is the law of the land. And I have a lot of good friends who are now able to be married because of the changes we’ve made legally and constitutionally.” Much of the clip below involves the ongoing email controversy. Via USA Today:

Asked about her written statement under oath that she had turned over all of her work-related State Department emails, only to have some turn up that were sent to then-commander of the U.S. Central Command David Petraeus, Clinton insisted that a “very thorough review process” had been conducted by her lawyers. When asked about the “discrepancy” between her statement that her email system began in March 2009 and the existence of emails between her and Petraeus from January of that year, Clinton said “there was a transition period” and added that she wasn’t “focused” on her email account. “I can’t control the technical aspects of it,” she said. “I’m not by any means a technical expert. I relied on people who were.”