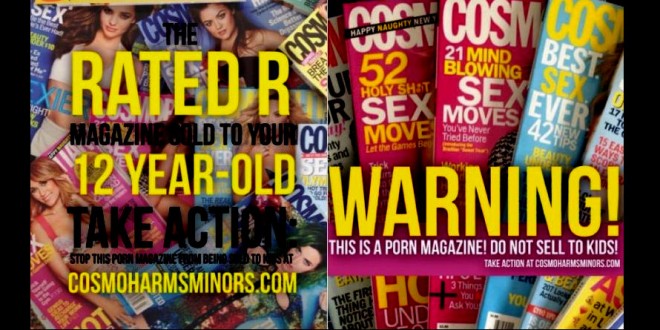 Morality In Media has laughably renamed themselves the National Center On Sexual Exploitation and today they report that more major retailers are surrendering to their demand that Cosmopolitan Magazine be racked behind blinders. From the American Family Association:

Dawn Hawkins, executive director of NCSE, tells OneNewsNow the magazine is worse than Playboy. “They package it like it’s an empowering magazine for women, but really it is a pornographic magazine with explicit sexual descriptions,” she says. “It’s more sexually explicit than something like Playboy. It’s just that people don’t even realize that unless they’re actually picking it up and reading it.” Consequently, the Center launched a promotion called Cosmo Harms Minors to get the magazine off the shelves or behind blinders. Hawkins has an update. “We’ve contacted many retailers of the magazine,” she explains. “And some are responding, saying they are going to move the magazine and put it behind blinders: Walmart for example, Rite Aid, Food Lion, Delhaven America.” Safeway also has shown some signs of cooperating as the campaign progresses.

Previous TRAILER: Where To Invade Next
Next End Times To Begin Next Week (Or Not) [AUDIO]