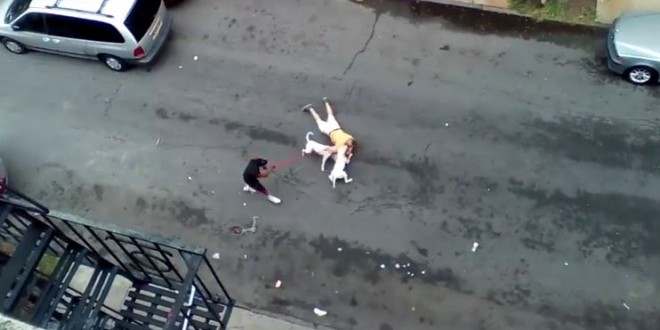 New York City news outlets and blogs are lighting up today after a ferocious pit bull attack in the Bronx left two men hospitalized. The attack has spurred renewed calls for the city to ban the breed. The New York Daily News reports:

A Bronx woman ordered her two pit bulls to viciously attack a 62-year-old man Friday morning as neighbors frantically tried to intervene and blood streaked the street, according to police and graphic video. Cynthia Oliver, 55, began arguing with the unnamed victim outside her building at 2414 Belmont Ave, police said. She soon let the pets off the leash and ordered them to attack, they said. After the pets lunged at the man, a good Samaritan tried to wrangle them in on their leashes, according to video filmed from a nearby apartment. The beasts kept up their assault as the victim twisted on the ground and the other man stepped over him to try to protect him. At one point, the pit bulls bit the man’s shoulders and pulled him closer to the curb. As a witness in the video screamed and called police, about eight neighbors swarmed to stop the attack, including those armed with a hose, a whip and a bat. While neighbors whipped the dogs away and blasted them with water, the pit bulls went after a 46-year-old good Samaritan.

The first victim lost his right ear and reportedly suffered severe nerve damage to his arms as well as deep puncture wounds all over his body. He and the man who first came to his defense are in stable condition in a Bronx hospital. Cynthia Oliver has been charged with eight counts of assault and two counts of reckless endangerment. The nature of her argument with the first victim is not yet known. The dogs are in the custody of Animal Control.

UPDATE: The Daily News has changed their above-linked story and added important new details that greatly contradict their first report.

Francesco Bove said he was heading into Our Lady of Mount Carmel Church on Belmont Avenue and 187th Street when the dogs got off their leash and began mauling him — an attack so violent the priest and neighbors came outside to help. “The Father read him his last rites because he looked like he was going to die,” Bove’s son, Anthony, told the Daily News Saturday. “But the Father said he had to promise to fight through it.” Police said the dog’s owner, Cynthia Oliver, ordered the dogs to attack, but Francesco Bove said that wasn’t true. “Those dogs, they were trained to fight,” Bove told the Daily News, noting he feels “pretty bad.” Bove, an artist who lives in Coney Island, did not know or interact with Oliver, who lives next to the church. He was in the area to look into restoring the marble at the church.

RELATED: According to DogsBite.org, pit bulls have killed 203 Americans in the last ten years. The total killed by all breeds of dogs is 326. A large portion of those killed were small children who were attacked by family pets. Pit bulls are banned on US military bases and more than 700 municipalities have banned or placed strong restrictions on pit bull ownership that usually include mandatory sterilization. New York City presently has no such city-wide restrictions although pit bulls, dobermans, and rottweilers are banned in public housing projects.

VIDEO: Be advised that the clip below is quite disturbing.