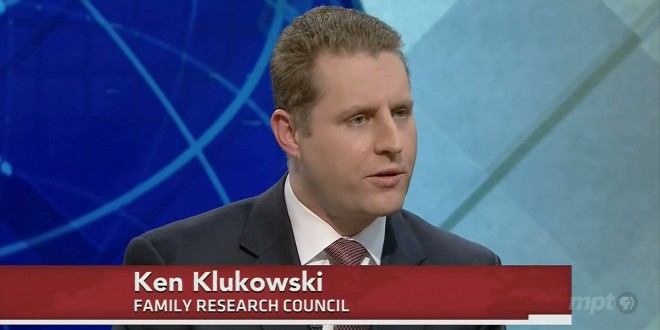 Breitbart Legal Editor: Kim Davis Has No Right To Impose Her Religion On County Staffers

Breitbart legal editor Ken Klukowski used to be the “Director Of Religious Liberty” at the Family Research Council and these days he’s the senior counsel at the equally foul Liberty Institute. Therefore you’ll likely be surprised at his latest column at Breitbart. He writes:

As Breitbart News explained earlier this week, Davis is not merely claiming a First Amendment right not to participate in same-sex marriages by issuing a marriage certificate. Such a refusal should be accommodated under the First Amendment in the same way that this country accommodates religious objectors to war: by assigning to noncombat roles those whose faith forbids them from using military weapons. But as Breitbart News previously reported, Davis is claiming the right to use her governmental power to order all of her deputy clerks and other subordinates that they shall not issue marriages licenses, either. Her personal right to religiously object probably does not extend to using her public-office power to order other government workers to conform to her personal faith-based beliefs. To use the military example again, this would be like a religious pacifist agreeing to be assigned to command an infantry combat unit, then ordering all the troops under her command to lay down their weapons and refuse to fight.

RELATED: Klukowski’s former boss at the the FRC, Tony Perkins, has been laying relatively low in the aftermath of the latest Josh Duggar scandal. Other than a brief appearance two weeks ago on Fox News and a handful of tweets over the last few days, he’s uncharacteristically kept out of sight. The FRC hasn’t issued Perkins’ usual daily outraged press release in several weeks.