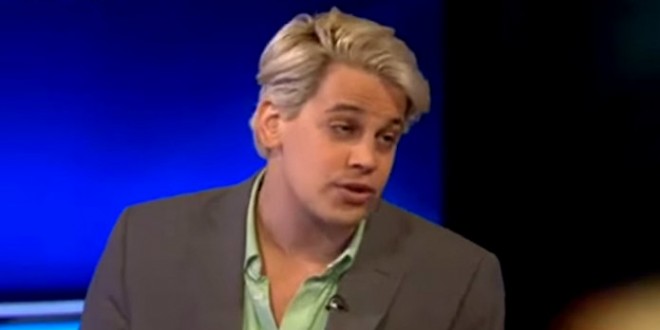 Breitbart Columnist Milo Yiannopoulos: “I Went Gay So I Didn’t Have To Deal With Nutty Broads”

Notorious British homocon and raging misogynist Milo Yiannopoulos is writing for Breitbart these days and today he explains why he “went gay,” why women are inherently less intelligent, why the female orgasm is a myth, and why sex robots will replace the need for girlfriends. Seriously. Here’s a sample:

“Most of the reason I went gay is so I didn’t have to deal with nutty broads. Imagine how much worse they’re going to get when the passive aggressive manipulation tactics stop working because the guy can get himself off with a thinner, hotter robot any time he wants to. They’re going to go mental. In the West, women are surging ahead into positions of dominance in the media, the arts, academia, politics, you name it. Some people will find this offensive, but: matriarchy is a problem for the rest of us. As feminist critic Camilla Paglia so memorably put it, if civilisation had been left in female hands, we would still be living in grass huts. When men start checking out en masse, as is already happening, you can say good-bye to all of society’s best astrophysicists, mathematicians, philosophers, composers and chess players. Scientific progress will effectively stall, because men are just as happy beating a video game as they are solving the riddles of the universe — and they’ll take the entertainment option if they have no interest in impressing women. Women will not take men’s places in these disciplines, because there simply aren’t enough women with IQs over 120. Again, sorry if you find that offensive, but it’s just a fact. IQ isn’t a perfect measure, by any means, but it’s the best gauge we have of whether someone can perform the higher-level functions needed to be a game-changing scientist or transcendently brilliant artist.”

There’s much, much more assholery at the link.

Previous Ridiculous Mat Staver Lie: One Of The View Hosts Has Called For Killing Kim Davis [AUDIO]
Next Apple CEO Tim Cook: Why I Came Out [VIDEO]