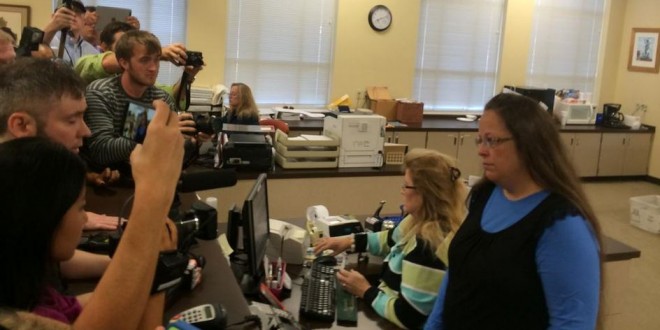 The office of Kim Davis, the elected clerk of Kentucky’s Rowan County, rejected requests for marriage licences from the first two same-sex couples to enter the courthouse Tuesday — just hours after the Supreme Court ruled against a request from Davis to be excused from issuing such licenses. Davis did not make an appearance at the courthouse counter, leaving employees to deny couples on her behalf. A woman at counter said Davis was “doing reports.” As The Washington Post reported Monday night, the high court turned away a request by Davis, who faces fines or even jail time if she doesn’t begin issuing marriage licenses Tuesday. Davis, a devout Apostolic Christian who opposes same-sex marriage, has argued that doing so would violate her religious liberties. Davis arrived at the courthouse in Morehead, Ky., shortly before its 8 a.m. opening Tuesday and told a photojournalist for a West Virginia NBC affiliate WSAZ that she knew what she was going to do.

VIDEO: Watch this furious gay couple shout “CALL THE POLICE!” after Davis tells them to get out of her office. UPDATE: Nutcases are praying outside the courthouse.

UPDATE: The crowd is chanting “DO YOUR JOB!”

Previous Public Policy Poll: Majority Of Republicans Believe Obama Is Muslim, Only 14% Sure He Is Christian
Next KENTUCKY: Fourth Husband Of Kim Davis Says She’s “Standing For God,” Hints He’ll Use Gun To Defend Her