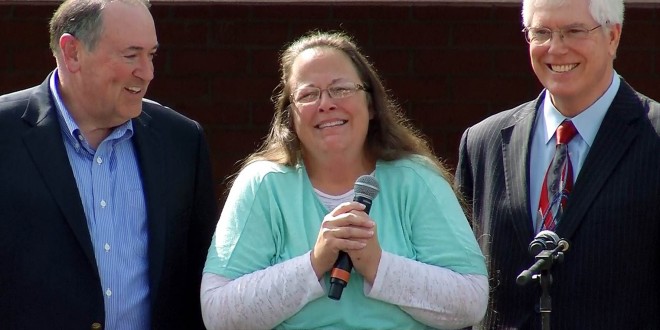 Via the Wall Street Journal:

Plaintiffs in a lawsuit against a Kentucky county clerk who refuses to issue marriage licenses to same-sex couples filed a motion Monday evening arguing that she is once again violating a federal court’s orders and asking a judge to enforce them. Rowan County Clerk Kim Davis, who objects to same-sex marriage on religious grounds, spent five days in jail earlier this month for repeatedly defying U.S. District Judge David Bunning’s order to issue licenses to all qualified couples, gay or straight. The judge then secured a commitment from five of her deputy clerks to issue licenses in her absence. Once he was satisfied that his order was being implemented, he released Ms. Davis from jail on Sept. 8 and instructed her not to interfere with her deputies’ work.

Yet the plaintiffs, represented by the American Civil Liberties Union, argue that is precisely what she has done. When she returned to work last week, she confiscated all the original marriage forms and provided replacements with numerous changes, according to a court filing by one of the deputies, Brian Mason. Among other things, she deleted all mentions of Rowan County, added the documents were issued “Pursuant to Federal Court Order” and replaced her deputy clerk’s official title with “notary public.”

Last week the Liberty Counsel declared that Davis herself has “grave doubts” over whether her altered licenses were valid.