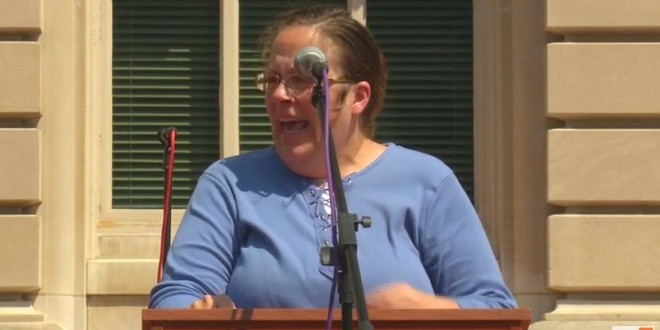 BOMBSHELL: Kim Davis Was Knocked Up With Another Man’s Twins While Married To First Husband

We all knew that Kim Davis has been married four times, but this is some Maury Povich-level fuckery. US News & World Report has the bombshell revelation that she was knocked up with another man’s twins four months before her first divorce. They write:

The Kentucky county clerk facing potentially stiff penalties for refusing to issue same-sex marriage licenses has been married four times, raising questions of hypocrisy and selective application of the Bible to her life. The marriages are documented in court records obtained by U.S. News, which show that Rowan County Clerk Kim Davis divorced three times, first in 1994, then 2006 and again in 2008. She gave birth to twins five months after divorcing her first husband. They were fathered by her third husband but adopted by her second. Davis worked at the clerk’s office at the time of each divorce and has since remarried. Davis has described her desire to strictly adhere to the Bible in stark terms and thus far has shown no sign of bending to court orders on same-sex marriage. She said Tuesday she fears going to hell for violating “a central teaching” of the Bible if she complies with the orders.

Fathered by her third husband and adopted by her second. Even Maury’s head would spin. But according to Liberty Counsel president Mat Staver, Kim has since been washed in the blood of Jesus, so all is forgiven.

The leader of the organization providing her legal representation, Mat Staver of Liberty Counsel, says he’s not sure precisely how many husbands Davis has had, but that it’s not relevant. “I know she was married more than once – I’ve heard three [times],” he says. “It’s a matter of fact that she’s been married multiple times.” Staver says “it’s not really relevant, it’s something that happened in her past” and that her conversion to Christianity about four years ago wiped her slate clean. “It’s something that’s not relevant to the issue at hand,” he says. “She was 180 degrees changed.” In a Tuesday statement released by Liberty Counsel, Davis admitted she had lived an imperfect life, but insisted her current beliefs are sincere.

Fellow renegade clerk Casey Davis, who claims to be unrelated to Kim, is likewise dismissive.

“I don’t have any problem with that whatever, how she was before. If the Lord can forgive her, surely I can,” he says. “That’s something that’s forgivable just like any other sin, but if you continue in it and live in it, there’s a grave danger in that.” Casey Davis says he wasn’t personally aware Kim Davis had been divorced and that he has no desire to speak with her about that. “You know this, people will say everything and all this stuff, they want to bring the worst out in the best of people. Obviously it’s human nature. I don’t like it and no one should,” he says.

Jesus is the mystical magical cure for everything, including hypocrisy.