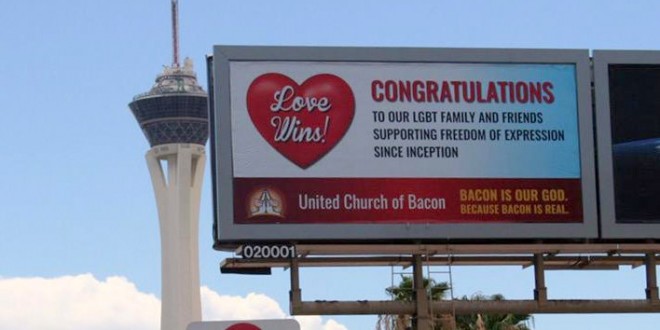 Some folks aren’t very happy about the latest billboard from the United Church Of Bacon. From the Christian Post:

A group of atheists who meet regularly under the guise of a church that worships bacon has attracted over 10,000 new members after offering free weddings and baptisms with the promise of marrying couples before something that is “real.” The organization, named the United Church of Bacon, was started in 2010 in Las Vegas by atheist John Whiteside who says he created the group to fight discrimination against atheists. In just three months’ time, the church’s membership has shot up by 12,000, thanks to a free wedding offer on its website. “Bacon lovers — we are truly blessed. The latest billboards for the United Church of Bacon in Las Vegas are advertising the organization’s commitment to offering free, legal wedding ceremonies to all couples. Now the church has reported that membership has tripled in the last three months to more than 12,000 new converts,” read the organization’s website.

According to the Christian Post, the main purpose of the United Church of Bacon is to “mock Christianity.” Which is super mean and way worse than telling strangers that they deserve to spend eternity writhing in a lake of fire. Previous Trump To Fundies: I’m One Of You [VIDEO]
Next Fiorina Surges In New CNN Poll [VIDEO]