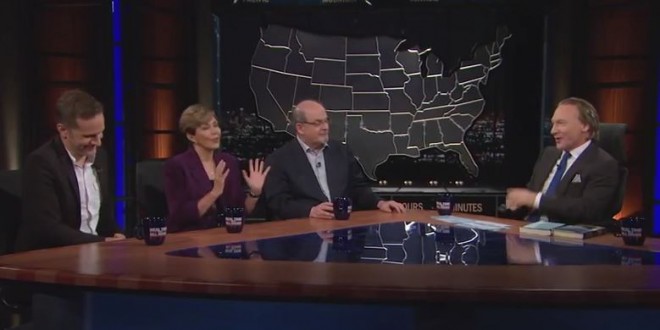 Last night Bill Maher declared that Kim Davis “and her ilk” want nothing short of a Christian version of Sharia law. But it was Salman Rushdie, who joked that he has a “small area of knowledge” with religious bigotry, who had the best lines. Rushdie: “It is a classic trope of the religious bigot that while they are denying people their rights, they claim that their rights are being denied. While they are persecuting people, they claim to be persecuted. While they are behaving colossally offensive, they claim to be the offended party. It’s an upside-down world.”

Previous Liberty Counsel: The Gays Who Sued Got Their Licenses So Kim Davis Doesn’t Have To Issue Any More
Next NEVADA: Burning Man Organizers Threaten To Sue Quizno’s Over Hilarious Viral Ad [VIDEO]