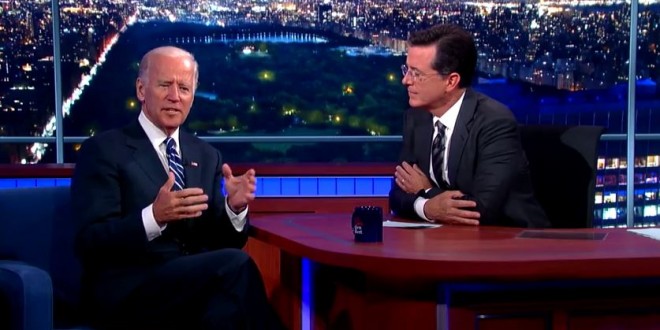 Biden: I Still Haven’t Made Up My Mind [VIDEO]

Vice President Joseph R. Biden Jr., in an emotional, wide-ranging interview on Stephen Colbert’s “Late Show” on Thursday, expressed doubt about the likelihood that he would run for president, saying that “I’d be lying if I said that I knew I was there.” Repeatedly touching on his parents, his faith and his emotional fragility from the recent death of his son Beau, Mr. Biden told Mr. Colbert that no “man or woman should run for president” without being able to promise voters that “you have my whole heart, my whole soul, my energy, and my passion.” “Nobody has a right, in my view, to seek that office unless they are willing to give it 110 percent of who they are,” Mr. Biden told Mr. Colbert, on his third night hosting the CBS program. Mr. Biden made just a few jokes on the show, saying to Mr. Colbert, who in 2012 ran a fake campaign for president, that “you should run for president again, and I’ll be your vice president.” The vice president never said directly that he did not plan to run for president, a decision that would disappoint the handful of “Draft Biden” supporters who chanted “Run, Joe, Run” in front of the Ed Sullivan Theater in Manhattan, where the show was taped Thursday afternoon. But Mr. Biden repeatedly seemed to hint that he may not be ready to run for president for a third time.

Both clips are worth your time. It was a fascinating interview.