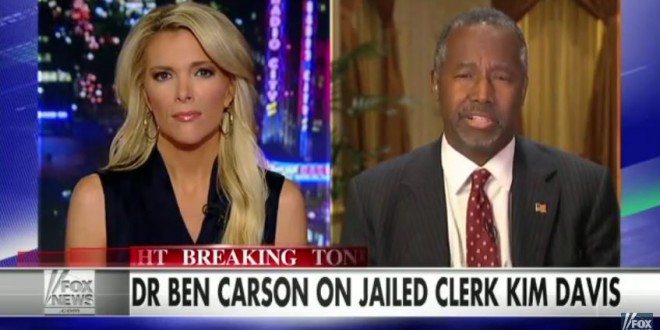 Ben Carson modified his position on Kim Davis, the Kentucky clerk jailed for refusing to issue marriage licenses to gay couples, and now says the government has a responsibility to accommodate her religious beliefs. Carson, a longtime advocate for traditional marriage, said that Kim Davis’ beliefs should be protected by the First Amendment, which guarantees the freedom to exercise religion. “I do believe in God. I believe in Jesus Christ,” the retired neurosurgeon told CBS12 in a Monday interview. “Congress has a responsibility to step up and create legislation that will protect the religious rights of all Americans.” “When [Davis] took the job, the Supreme Court hadn’t made this ruling. If they had, she might not have taken this job. So I think they have a responsibility to accommodate her,” Carson said. The interview is a departure from the Carson campaign’s earlier remarks on Davis’ situation. Previously, one representative said that Carson believed the SCOTUS ruling had to be respected because it is the law of the land. The frontrunner’s friend and confidante, Armstrong Williams, was adamant about the campaign’s position as well. “Dr. Carson has said since the Supreme Court ruling that it is the law of the land and that’s what he respects,” he told Talking Points Memo Sept. 1. “There’s no agenda here unless you create one.”

If you are unfamiliar with Armstrong Williams – this might blow your mind.

Previous Tony Perkins: Kim Davis May Have Sparked New Wave Of Anti-Gay Resistance Across America
Next Rep. Louie Gohmert: If I Get My Way On The Iran Deal, I Won’t Run For Reelection [AUDIO]