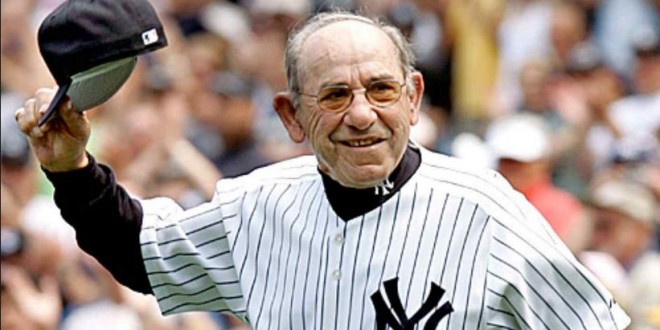 Legendary Yankees catcher and famed wordsmith Yogi Berra has died at the age of 90.  Yahoo Sports has the obituary:

New York Yankees icon, and Hall of Fame catcher, Yogi Berra has died at the age of 90 late Tuesday night. The Yogi Berra Museum was first to break the news, which was confirmed by MLB. On the field, Berra was regarded as one of the greatest catchers of all time. Over his 19-year playing career, Berra hit .285/.348/.482, with 358 home runs. He made 15 straight All-Star games and won three MVP awards during his 18 seasons with the Yankees. Berra appeared in 14 World Series as a player, winning 10 of them. Both of those figures are a major-league record. He was elected into the Hall of Fame in 1972. The Yankees also retired Berra’s No. 8 that same year.

Berra would eventually manage four seasons with the Mets, taking them to the World Series in 1973. The team lost in seven games. With the Mets, Berra compiled a 292-296 record. The Yankees brought him back aboard in 1984, but Berra didn’t last long. He was fired just 16 games into the 1985 season after the team got off to a slow start. In seven seasons as a manager, Berra compiled a 484-444 record. All of those accomplishments, however, might be overshadowed by Berra’s vivacious personality off the field. Berra is responsible for a number of famous quotes about the game, including “it ain’t over till it’s over.” He also said “baseball is ninety percent mental, and the other half is physical,” and “love is the most important thing in the world, but baseball is pretty good, too.”

My favorite Yogi-ism: “The towels there were so thick, I could hardly close my suitcase.”  Berra, of course, was the inspiration for Yogi Bear, but Hanna-Barbera ridiculously claimed at the time of the character’s debut that the name was just a coincidence. Previous Kim Davis: If I Had A Gay Child, He Wouldn’t Get A Marriage License From Me [VIDEO]
Next Price-Gouging Pharma CEO Martin Shkreli: I’ll Lower The Cost Of That AIDS Drug