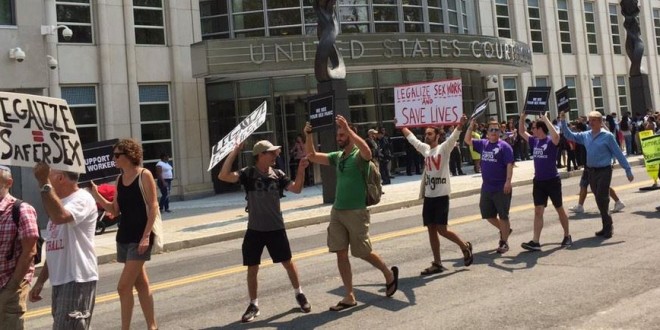 At The Rentboy Raid Protest [VIDEO]

Yesterday dozens of activists demonstrated outside the federal courthouse in downtown Brooklyn in protest against the raid on Rentboy.com headquarters. The New York Daily News reports:

Chanting “Keep your laws off my body,” gay activists marched Thursday outside Brooklyn Federal Court demanding that prosecutors drop prostitution charges against seven employees of the Rentboy.com website. About 70 protesters — men and women — carried signs calling for the legalization of prostitution, and some activists even suggested last week’s takedown could be a watershed moment for the gay rights movement, like the riot that erupted after cops raided the Stonewall Inn in Greenwich Village in 1969. “This is consensual sex, no one is being trafficked or exploited,” said Andy Humm, a city rights commissioner under former Mayor David Dinkins. “Tell me why this happened now when Rentboy.com has been around 18 years and had a float in the Gay Pride Parade that the police commissioner and the mayor attended.” Many wondered why the Obama administration’s Justice Department led by Loretta Lynch and its Department of Homeland Security would assign resources to a prostitution case which does not seem to involve the exploitation of immigrants or children. In response to accusations that the prosecution was selectively going after gays and minorities, U.S. Homeland Security spokesman Khalid Walls said: “Any insinuation that a specific population was targeted is categorically false.”

In the clip below you’ll spot noted activists Ann Northrop, Ken Kidd (also in the first photo below), Janice Thom, and many others.