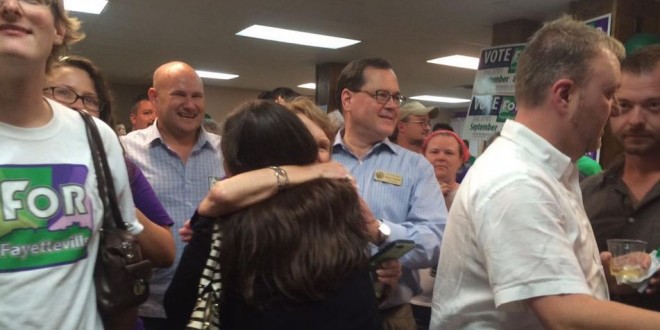 In a reversal of a similar special election last year, Fayetteville voters resoundingly ratified the city’s Uniform Civil Rights Protection ordinance Tuesday. Final but unofficial results from the Washington County Election Commission showed 7,666, or 52.8 percent, of voters cast ballots in favor of the contentious anti-discrimination law, and 6,860, or 47.2 percent, voted against it. The ordinance is scheduled to take effect Nov. 7, provided it withstands a legal challenge from Protect Fayetteville, the group that has advocated against the pro-LGBT law. “I think this says that Fayetteville voters really are fair and inclusive folks,” said Kyle Smith, president of For Fayetteville, shortly after election results were announced. “I think we proved tonight that this is the Fayetteville we all know and love.” The Uniform Civil Rights Protection ordinance prohibits discrimination in employment, housing and places of public accommodation on the basis of sexual orientation and gender identity. It creates a seven-member, City Council-appointed Civil Rights Commission to review complaints. Violators are subject to fines of up to $100 for the first offense.

The Human Rights Campaign, which provided support during the December 2014 repeal referendum, this time withheld their financial backing, citing the bill’s religious loopholes.

“We highly respect and value the work being done by our partners to expand LGBT equality across Arkansas. While we can’t lend our support to the current version of Fayetteville’s proposed nondiscrimination ordinance because it stops short of full and equal protections for LGBT people, we fully plan to continue working with our friends and neighbors here on other efforts to bring about full equality for all LGBT Arkansans.”

This time the good guys were outspent by the haters by nearly a 2-1 margin, but still pulled out the win. As noted above, the haters will not give up and will launch legal challenges to today’s result. Via the Arkansas Times:

Opponents sued to stop the election. They failed to get an injunction when Judge Doug Martin said they’d waited too late, the day before voting began. But the lawsuit remains alive. Opponents say they will continue to challenge the process by which the ordinance reached the ballot and also to argue, if it passes, that a state law passed by anti-gay legislators prohibited cities from passing such ordinances. Several lawyers, including Fayetteville City Attorney Kit Williams, have said both statutory and constitutional grounds exist for defending the Fayetteville ordinance against the legislation sponsored by Sen. Bart Hester and other anti-gay legislators. Hester was among many anti-gay people who live outside Fayetteville but have tried to influence the election because it represents a setback in Northwest Arkansas to their cause.

Previous Survivor Band Slams Kim Davis: We Wouldn’t Give Her The Right To Use Charmin, Much Less Our Song
Next Tony Perkins: Kim Davis May Have Sparked New Wave Of Anti-Gay Resistance Across America