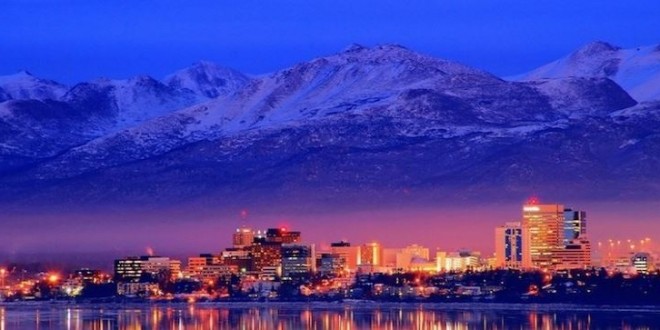 Big news this morning out of Anchorage. The Alaska Dispatch News reports:

In a 9-2 vote, the Anchorage Assembly late Tuesday night made it illegal in the city to discriminate over sexual orientation or gender identity. The new local civil rights ordinance, the first of its kind in Alaska, will take effect as soon as it is signed by Assembly Chair Dick Traini, with the Assembly rejecting an amendment to require a public advisory vote in April. Mayor Ethan Berkowitz said he does not plan to veto the ordinance, which was co-authored by Assembly members Bill Evans and Patrick Flynn and passed shortly before midnight Tuesday. The ordinance adds protections to Anchorage equal rights laws for gay, lesbian, transgender and bisexual people in housing, employment and public accommodations and includes exemptions for religious groups and those with ministerial duties.

Local haters, as always, are vowing to force a referendum to repeal the ordinance.

Opponents of the ordinance said they plan to pursue a referendum to repeal the law. During the meeting, people were signing their names, addresses and contact information onto red and white cards to indicate opposition. The Rev. Jerry Prevo of the Anchorage Baptist Temple said after the meeting he was surprised that the ordinance passed the Assembly by such a large margin. “Tonight we have nine Assembly members that apparently didn’t care what 57 percent of voters wanted, and voted their way, and told 57 percent of the population of Anchorage they don’t care,” Prevo said, referencing the margin by which voters rejected a 2012 ballot measure on an Anchorage LGBT anti-discrimination law.

PREVIOUSLY ON JMG: Over the screams of local haters, the Anchorage Assembly first approved a broad LGBT rights bill in August 2009, but it was vetoed days later by then-Mayor Dan Sullivan, who just left office last month. The Assembly then declined to attempt to override the mayor’s veto. Late in 2011 activists managed to qualify a new LGBT rights bill for a public referendum, sending the local Catholic Church, NOM, and Alliance Defending Freedom into overdrive with nasty websites and a truly foul anti-trans video campaign. In April 2012 the referendum failed by a 58-42 margin after local Christian groups pulled a dirty trick regarding voter registration. Despite loud calls for a voter fraud investigation, including claims by the ACLU that anti-gay groups had encouraged non-Anchorage residents to vote, the Assembly voted against any formal inquiry.