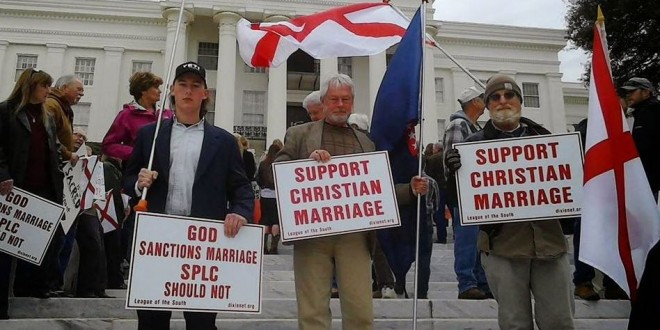 Earlier this year Sanctity Of Marriage Alabama held a rally in support of Roy Moore at which attendees waved signs supplied by the League Of The South, the white supremacist group which recently “celebrated” the 150th anniversary of the assassination of “tyrant” Abraham Lincoln. Tonight they will rally in support of Kim Davis at the Alabama Supreme Court. From their Facebook event page:

Brothers and sisters in Christ! It is time to drop everything and cry out to God. Our nation is crumbling at the foundations. Today, a Christian clerk has been JAILED in the United States for believing what Christians believe and doing what all Christians should do. In the wake of Obergefell and the Ashley Madison hack, Christians continue to be heartbroken at the attacks on marriage and family coming from all sides. Babies are being murdered and their bodies sold for profit (using taxpayer dollars). The Alabama Supreme Court is still deliberating whether or not to uphold their ruling from March that championed marriage and the rule of law. Christians across Alabama and those holding public office must rise up, unite, speak out, and stand on God’s Word and the Constitution of United States – without fear – in the public square.

RELATED: Right Wing Watch has reported that Roy Moore’s successful return to the Alabama Supreme Court was bankrolled by Michael Peroutka, a former leader of the League of the South.