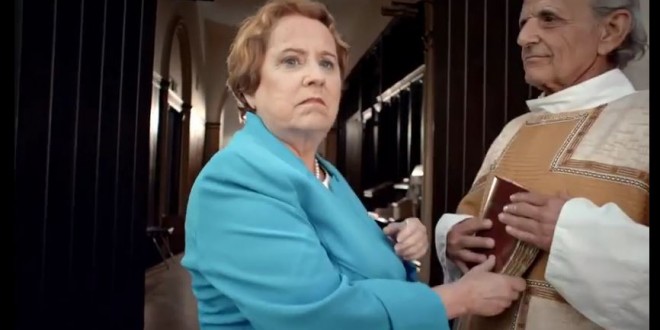 Some of you thought yesterday’s hilarious Tide To Go ad was too good to be true. You were right. AdWeek reports:

Tide has already made one commercial featuring a gay couple—it’s been airing in Canada, as Procter & Gamble considers bringing it to the U.S.. And now, an ad for Tide to Go about gay marriage has gone viral, garnering over 400,000 views on Facebook. But the spot is actually spec work from Tiny Giant director Mark Nickelsburg. While any spot like this from a major brand would probably do well online right now, this one successfully thwarts the viewer’s expectations—gay marriage isn’t what’s offensive here—and that certainly helps push up the view count. P&G did not immediately responded to a request for comment. But it would be smart for Tide to use this excitement to finally roll out its current ad featuring a gay couple in the U.S.

On the upside, now we get to watch a few days of outraged boycott screams before the truth gets out. The first clip below is the Canadian ad mentioned above. Below is yesterday’s now wildly viral clip.

Previous Columnist For Liberty Counsel’s Matt Barber: Gays Are Planning To Murder Faithful Christians
Next Facebook Is Finally Getting A Dislike Button