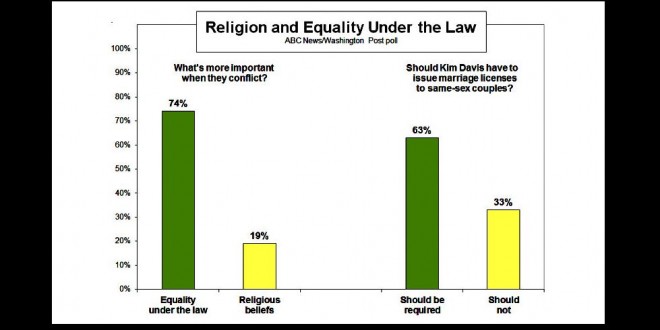 According to an ABC/Washington Post poll issued today, nearly three-quarters of Americans believe that “equality under the law” should supersede personal religious beliefs. About two-thirds of the poll’s respondents also say that Kim Davis should be required to issue licenses. Politico notes how these latest number conflict with a poll taken shortly after the Obergefell ruling:

In that poll, 49 percent said that local officials should not be required to issue marriage licenses to same-sex couples if they have religious objections, while 47 percent said they should be. In the same poll, 56 percent to 39 percent said it is more important for the government to protect religious liberties than gay rights.

More from the poll:

Majorities prioritize legal equality over religious beliefs across many groups, including gender, age, race, education, income and region. Equality also prevails across party and ideological lines, save for “strong” conservatives and evangelical white Protestants, both of whom divide about evenly on the question. Further, majorities of evangelical white Protestants and strong conservatives (61 and 66 percent, respectively) say Davis should not be required to issue marriage licenses to same-sex couples. That view also is more prevalent – without reaching majorities – among Republicans, those with less education and lower-income Americans, compared with their counterparts. Support for the further step of jailing Davis peaks among liberals, those who are financially better off, college graduates, younger adults, Democrats and those who are not religiously affiliated.