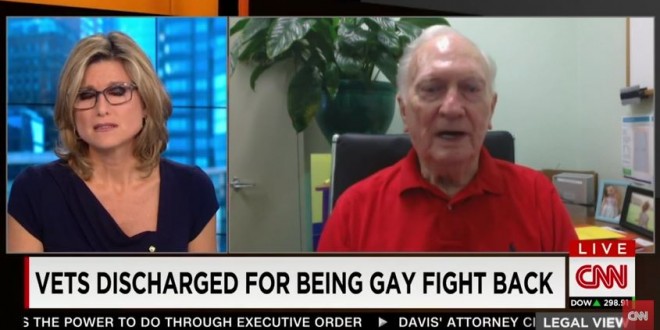 82 year-old Donald Hallman is among an estimated 114,000 men and women who were booted from the military over their homosexuality between WWII and the end of DADT. Hallman appeared on CNN yesterday to demand that his record be cleared of its “dishonorable” notation. The Dallas Morning News agrees in an editorial published today which supports a bill pending before Congress:

To set things right, gay veterans must apply individually to revise their discharge status. It is time consuming and puts the onus on the veteran to prove that the dishonorable discharge status was wrongfully assigned. Many must hire lawyers at their own expense. The process can take years. Straight veterans with identical service records have faced no such hurdles. According to a recent New York Times report, the Department of Defense upgraded 80 percent of the nearly 500 requests submitted since 2011. Under current military procedures, the Veterans Administration may refuse benefits when a discharge was the result of “aggravating” circumstances – misconduct leading to a general court martial, or when a service member deserts, refuses orders or refuses to wear the uniform. For those veterans whose sexual orientation was the sole reason for the reduced status, the frustration factor must be enormous. They’ve given years of service in support of their country’s military missions, only to be told that it doesn’t count – for reasons that never were the military’s business to begin with.

The pending bill would streamline the name-clearing process and place the burden on the military to prove that a dishonorable discharge was warranted.

Previous Trump: Carly Fiorina Is Too Ugly To Be President
Next Kim Davis Editorial Cartoon Nails It