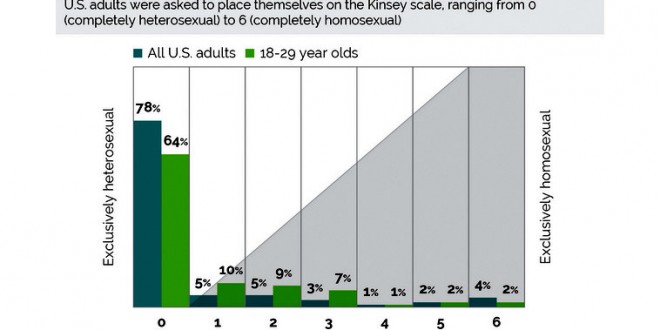 YouGov Survey: One-Third Of Young Americans Say They Are Not Completely Heterosexual

Following up on last week’s British survey, YouGov has released a poll taken in the United States in which 31% of those 18-29 say they are not 100% heterosexual.  From the latest report:

Younger Americans are noticeably less likely than their elders to put themselves in a firm category. While 80% of all Americans say that they are completely heterosexual or homosexual only 66% of under-30s say the same. 29% of under-30s put themselves somewhere on the category of bisexuality. The older someone is the less likely they are to say that they have fluid sexual attractions. 24% of people aged 30 to 44 say that they’re somewhere on the scale of bisexuality, compared to 8% or less of over-45s. A large number of Americans who classify themselves as heterosexual still admit to having had same sex experiences. 12% of heterosexual American adults say that they have had a sexual experience with someone of the same sex. Straight women (15%) are almost twice as likely as straight men (8%) to say that they have had a sexual encounter with someone of the same sex.

In the British survey nearly half of the younger age group identified with some degree of bisexuality.