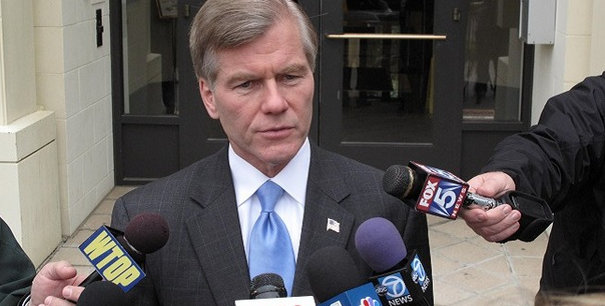 Yesterday the Fourth Circuit Court of Appeals declined to hear a review of former GOP Virginia Gov. Bob McDonnell’s corruption conviction. Lawyers for McDonnell then announced that he will appeal to the Supreme Court. The Hampton Roads Pilot reports:

Attorney Henry Asbill declined to say whether McDonnell will have to report to prison to begin serving his two-year sentence. He has remained free on bond since a three-judge panel of the appeals court unanimously upheld his convictions in July. He could file a petition asking that he remain free until the Supreme Court decides whether to take his case. Carl Tobias, a University of Richmond law professor who closely follows the Richmond appeals court, said it’s likely that McDonnell will have to report to prison soon. In its brief order Tuesday, the full 15-member 4th U.S. Circuit Court of Appeals said eight judges voted against reconsidering the panel’s decision to uphold McDonnell’s convictions. Seven others, “deeming themselves disqualified, did not participate,” the order said. No explanation was given for what Tobias called an unusually large number of recusals.

McDonnell was convicted on eleven felony corruption counts for accepting about $177,000 in gifts and loans from a local businessman. His wife was also convicted and her appeal has not yet been heard. McDonnell was a vigorous opponent of LGBT rights while governor. (Tipped by JMG reader Smith)