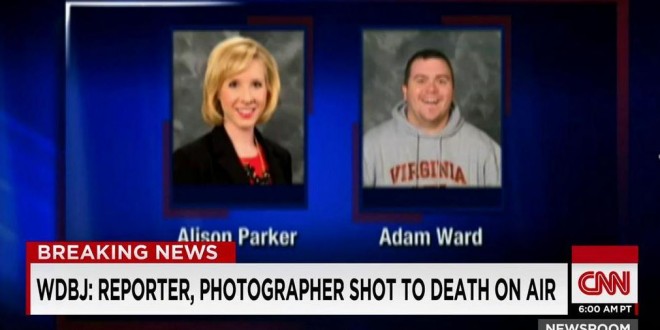 VIRGINA: Reporter & Cameraman Shot To Death On Air UPDATE: Suspect In Critical After Shooting Himself

Roanoke’s CBS affiliate reports on this morning’s on-air murder of two of their staffers:

Two WDBJ7 employees were killed Wednesday morning in an attack at Bridgewater Plaza. This happened during a live broadcast around 6:45 a.m. Police are looking for a suspect who apparently opened fire on WDBJ7 photographer Adam Ward and WDBJ7 reporter Alison Parker. Adam was 27-years-old. Alison just turned 24. Both were from the WDBJ7 viewing area. Adam graduated from Salem High School and Virginia Tech. Alison grew up in Martinsville and attended Patrick Henry Community College and James Madison University. The incident happened during a WDBJ7 live report. Deputies from Franklin County and Bedford County are on scene.

At this writing the unknown shooter is still at large and local schools are in lockdown. No motive for the attack has yet been reported. CNN notes that the pair had been dating.

UPDATE: Correction to the above: The two victims were dating other station staffers, not each other.

UPDATE II: Local media is reporting that the suspect is a former station employee and has killed himself after a confrontation with police.

UPDATE III: The gunman filmed the murders himself and posted the video to his Facebook account. He also sent the below tweets. (Read them from the bottom up.) UPDATE IV: Local media have retracted their report that the killer has died and now say he’s in critical condition.