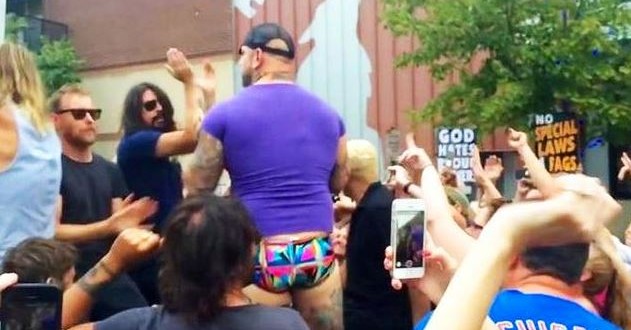 Westboro Baptist Church targeted a Foo Fighters concert at Kansas City’s Sprint Center on Friday, Aug. 21, and the band fired back — with a Rickroll. The band arrived on the scene via a pickup truck, blasting Rick Astley’s 1987 single “Never Gonna Give You Up” and holding up signs that read “You Got Rick Roll’d Again” and “Keep It Clean.” Dave Grohl enthusiastically clapped along to “Never Gonna Give You Up” as fans cheered. The song’s video has been used as an Internet meme in which people fool others into watching Astley’s clip since 2007, when the phrase “Rickrolling” was born. This isn’t the first time Grohl and Co. have trolled Westboro picketers. Back in September 2011, the band uploaded a video of themselves rolling in on a flatbed truck, singing a country song with lyrics like “Think I’m in the mood for some hot-man muffins” in front of the Westboro group of protestors outside their show in Kansas City that August.

The clip below has gotten a million views overnight.