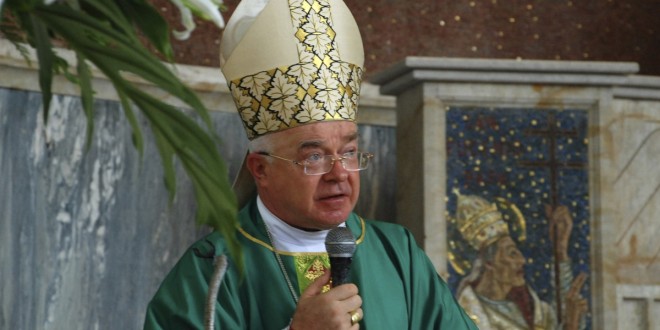 The Vatican’s former ambassador to the Dominican Republic, the highest-ranking Holy See official to ever be charged with sexually abusing young boys, was found dead Friday as he awaited trial, the Vatican said. In a statement, the Vatican press office said preliminary checks on Jozef Wesolowski, 67, “indicated that the death was from natural causes.” A Franciscan priest who works as a confessor in St. Peter’s Basilica found Wesolowski dead at 5 a.m. with the television on in the Vatican room where has been held in modified house arrest for several months, it said. The statement said the Vatican prosecutor ordered an immediate autopsy and that Pope Francis was duly informed. The Vatican said the cause of death would be released. Wesolowski had been due to go on trial in a Vatican tribunal on July 11 for allegedly causing grave psychological harm to victims and possessing an enormous quantity of child pornography. But on the morning of the hearing, he was hospitalized in intensive care because of an unidentified “sudden illness.” The presiding judge adjourned the trial indefinitely until he recovered. Wesolowski was previously defrocked under the Vatican’s canon law procedures but was facing possible jail time if convicted in the Vatican’s civil tribunal.

Wesoloski was recalled to the Vatican in 2013 after Dominican news outlets accused him of hiring male prostitutes. (Tipped by JMG reader David)