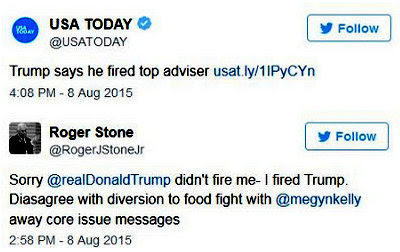 Donald Trump made the surprising announcement Saturday afternoon that he was firing his top adviser, Roger Stone, but hours before the political consultant’s friends told POLITICO that he was actually quitting. Earlier in the day, Stone’s friends told POLITICO that he sent an email to Trump announcing his decision to leave the campaign. More than an hour later, Trump told a Washington Post reporter he fired Stone. The news coincidentally hit Twitter about 15 minutes after Stone told a Fox News TV show that he couldn’t appear Saturday because he was no longer affiliated with the campaign, friends say. “I can’t believe Roger got out-Trumped, that he got out-Stoned,” one of Stone’s friends said. “Roger’s mistake was trusting Donald and not establishing a clear record that he was resigning first.” Regardless of who resigned or was fired first, the campaign shakeup was the first sign that Trump’s election effort was seriously damaged from within after his Thursday night debate performance and his subsequent comments in which he attacked one of the Fox debate moderators, Megyn Kelly.

According to Politico, Stone is considered to be a “Nixon-era dirty trickster.” Hit the link for a conversation that reportedly took place between the two after the debate.

Previous Trump: All You Loser Deviants Are Totally Misinterpreting Meaning Of “Wherever”
Next Duck & Cover