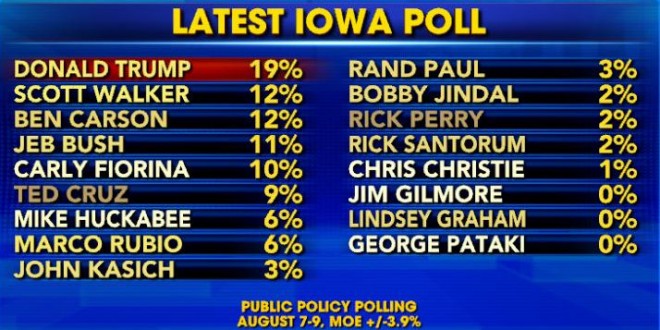 But his lead did shrink a bit. Via USA Today:

Businessman Donald Trump continues to lead the Republican field in Iowa, a new Suffolk University Poll finds, but his performance in last week’s opening debate has dented his standing among GOP partisans and cost him some ground in the state that will hold the first presidential contest next year. Also hit: Former Florida governor Jeb Bush, who sank to seventh place and now narrowly trails former CEO Carly Fiorina in the key early state. Florida Sen. Marco Rubio scores the biggest boost, rising to third. The survey of 500 Iowans likely to participate in the Republican caucuses, taken by landline and cell phone from Friday through Monday, is one of the first quantitative measures of the impact of Thursday night’s debate in Cleveland, hosted by Fox News and Facebook.

Previous Rick Perry Runs Out Of Money, Stops Paying Staffers
Next Postmodern Jukebox & Mykal Kilgore – My Heart Will Go On