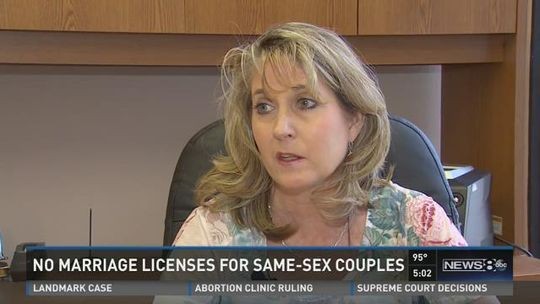 The commissioners of Hood County, Texas have agreed to pay the legal fees of the gay couple who sued county clerk Katie Lang, saying that they are saving her from “dealing with the additional expense and significant financial exposure her actions caused the taxpayers of her county.” More from the Dallas Morning News:

It has been a month since Joe Stapleton and Jim Cato finally got the marriage license Hood County Clerk Katie Lang denied them because of her religious beliefs. It only took a federal lawsuit to get it. Today that suit was settled, and according to the attorneys representing Stapleton and Cato, Lang’s refusal to issue the license ended up costing Hood County $43,872.10 in attorney’s fees. They will now move to dismiss the suit. “It is a shame that Hood County Clerk Katie Lang refused to follow the rule of law, causing our clients to go through the difficulties of hiring lawyers and filing a federal lawsuit to obtain the marriage license to which they are constitutionally entitled,” says attorney Pat O’Connell, one of Stapleton and Cato’s attorneys. “And it is sad that the taxpayers of Hood County have to pay the price for their elected official’s misconduct.”

At this writing Lang’s anti-gay declaration remains on her official county website. It reads:

The religious doctrines to which I adhere compel me to personally refrain from issuing same-sex marriage licenses. Nonetheless,the County Clerk’s Office of Hood County will have staff available and ready to issue same-sex marriage licenses. I am grateful that the First Amendment continues to protect the sincerely held religious beliefs of public servants like me. As Justice Kennedy stated, “it must be emphasized that religions, and those who adhere to religious doctrines, may continue to advocate with utmost, sincere conviction that, by divine precepts, same-sex marriage should not be condoned.”