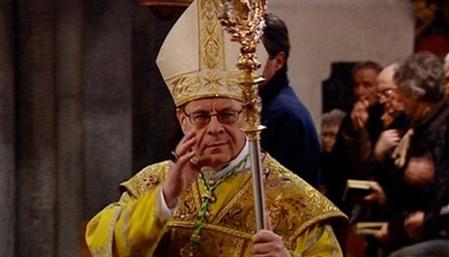 A Swiss bishop is being sued for allegedly claiming gay men should be put to death. Pink Cross, the Swiss Gay Federation, is filing a criminal complaint against Vitus Huonder, the Catholic Bishop of Chur, for reportedly making homophobic comments while quoting passages from the Bible. In his 50-minute address in Germany on 31 July, he cited the usual passage about how homosexuality is an ‘abomination’. For those unfamiliar with Leviticus 20:13, it reads: ‘If a man also lie with mankind, as he lieth with a woman, both of them have committed an abomination: they shall surely be put to death; their blood shall be upon them.’. He then said, to applause: ‘Both of these passages alone suffice to clarify unambiguously the church’s position on homosexuality’. Pink Cross has accused Huonder of ‘inciting people to crimes’ and filed a criminal lawsuit against the bishop today (10 August). If he is found guilty, he faces up to three years in prison.

Sanctions against hate speech made on the basis of sexual orientation or gender identity were approved by Switzerland’s national legislature in March 2015.

Previous REPORT: Trump Is Buying Positive Coverage From Breitbart
Next Pat Robertson: Gays And Everybody Who Accepts Them Are Totally Going To Hell [VIDEO]