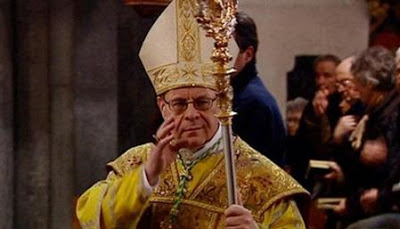 Vitus Huonder, the controversial Catholic bishop of Chur in eastern Switzerland, has once again attracted criticism for quoting homophobic Bible passages and denouncing non-traditional family models. At the “Joy in Faith” forum in the German city of Fulda, he quoted a passage from the Bible which said homosexuals should be punished by death. In his 50-minute address on Friday, titled “Marriage – a gift, sacrament and order”, Huonder quoted various passages backing up his views. He also slammed gender theory, divorce, sex education and gay marriage. Regarding homosexuality, the 73-year-old bishop quoted two verses from the book of Leviticus, including Leviticus 20:13: “If a man also lie with mankind, as he lieth with a woman, both of them have committed an abomination: they shall surely be put to death; their blood shall be upon them.” In response to applause, he continued: “Both of these passages alone suffice to clarify unambiguously the church’s position on homosexuality”. In his opinion, the passages also had implications for the definition of marriage and the family. “There is no diversity when it comes to marriage and family models, although a book has just come out in my bishopric called ‘Family Diversity’,” he said. “Even speaking of family diversity is an attack on the Creator.”

The Swiss LGBT rights group Pink Cross says it is looking into having Huonder charged under hate speech laws. Pink Cross: “It was in the name of these same Bible passages that a Jewish extremist stabbed six people.” Yesterday Huonder released a statement in which he expressed regret that his words were interpreted as “contemptuous.”

RELATED: Sanctions against hate speech made on the basis of sexual orientation or gender identity were approved by Switzerland’s national legislature in March 2015.