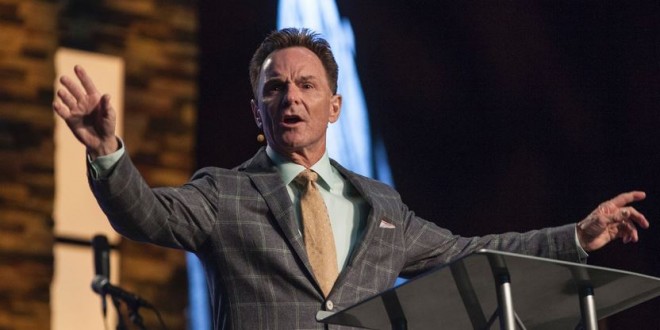 Ronnie Floyd is head of the Southern Baptist Convention and preaches at a church attended by the Duggar family. Yesterday Floyd delivered a sermon which obliquely referenced the latest Josh Duggar scandal. According to Floyd, if spouses don’t put out, Satan steps in.

“Adultery, being sexually or emotionally unfaithful to your spouse, that’s wrong. Some of you are on the other end of someone else destruction.” Floyd then spoke about five guidelines people should follow when it comes to relationships and sex. One of the most notable was the fifth suggestion, which mentioned keeping both husband and wife happy through “sexual contact,” which may only be put on hold for “focused prayer.” However, Floyd warned, if a husband or wife fails to keep his or her partner happy sexually they are opening themselves “up to the attack of the enemy”.  “And that enemy is going to take your spouse away from you,” he said. “Both men and woman have their sexual needs met by someone, somewhere, somehow.” Floyd carefully stated that the service was not designed to make anyone “feel guilty,” but for educating and helping empower those who may not understand the Biblical view on sex.