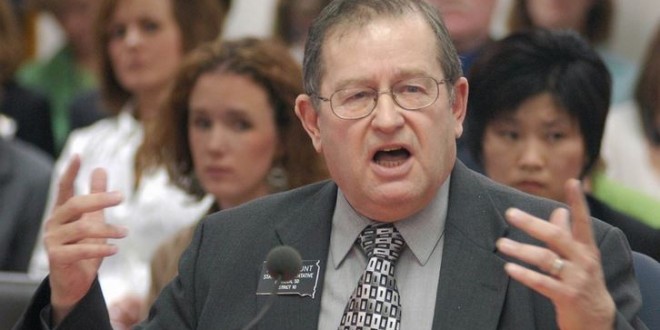 The battle over how to officially determine someone’s gender arises from a controversy over whether transgender high school students can declare their own gender when participating in sports. A high school athletic group enacted a policy last year that allows students to decide for themselves which gender group they will compete with. But some lawmakers are unhappy with that concept. So, the issue appears poised to carry into the 2016 legislative session, and one possible approach would be a law that may remove a person’s right to decide for themselves. The Legislature’s interim committee dealt with the issue Thursday and requested a draft of a potential state law. The proposal from Rep. Roger Hunt, R-Brandon, would rely on official birth certificates and visual inspections for determining gender rather than allowing people to decide and declare their gender on their own. He said gender is determined at conception and the transgender debate is riding the gay marriage wave. “This is South Dakota. We haven’t adopted the East Coast culture. We haven’t adopted the West Coast culture. We maintain our own culture,” Hunt said.

The legislation is yet another response to the South Dakota High School Activities Association’s decision to make its policies inclusive to trans athletes last year. The current policy requires that parents notify the school of their child’s gender identity and the school collects information from the family, such as parents, friends and teachers, that the student’s gender identity is different than what is listed on their birth certificate or school registration records and receives written verification from a health care professional who can attest to the child’s consistent gender identification and expression. Once a decision is made based on the available records and statements, trans students can participate in sports according to their gender identity for the rest of their high school career. The policy also provides guidance for correct pronoun use and access to locker rooms and bathrooms.