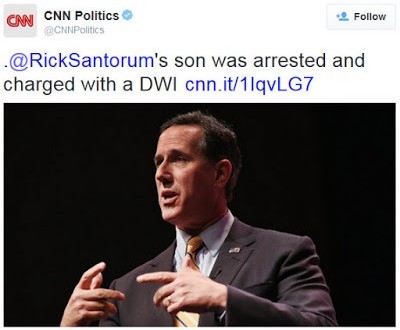 Republican presidential candidate Rick Santorum’s son was arrested and charged last month with driving while intoxicated after registering an initial blood-alcohol level almost twice the legal limit. Richard John Santorum, Jr., known as John, was stopped at a DUI checkpoint in suburban Virginia at about midnight on July 11, according to court papers. “Upon contact, I detected the odor of alcoholic beverages and the accused had glassy eyes and slurred speech,” a police officer wrote in Santorum’s criminal complaint. During his field sobriety tests, the 22-year-old Citadel cadet “showed specific signs of impairment,” according to the complaint.