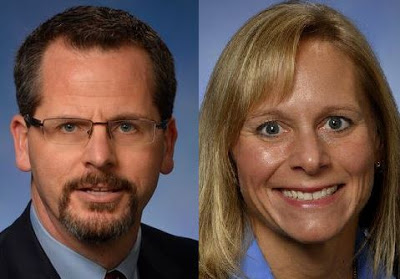 Back in June, I reported that Michigan Tea Party state reps Todd Courser and Cindy Gamrat had introduced a trio of anti-gay marriage bills, two of which would have outlawed all civil marriages. Under their proposed bills, only “a minister of the Gospel, cleric, or religious practitioner” would be allowed to issue marriage licenses and perform weddings. Today the Detroit News has a juicy follow-up:

State Rep. Todd Courser planned the distribution of a fictional email alleging he had sex with a male prostitute in a bid to conceal his relationship with Rep. Cindy Gamrat, according to audio recordings obtained by The Detroit News. Courser, a Lapeer Republican, said on one recording the email was designed to create “a complete smear campaign” of exaggerated, false claims about him and Gamrat so a public revelation about the legislators’ relationship would seem “mild by comparison.” Interviews with former House employees and the recordings show freshman lawmakers Courser and Gamrat, R-Plainwell, used their taxpayer-funded offices to maintain and cover up their relationship. Courser, 43, and Gamrat, 42, rose from the ranks of tea party activism, battled establishment Republicans to win seats in the House last year and formed their own legislative coalition.

Both reps are opposite-married with three children each. From Gamrat’s campaign page: “Our nation was built upon a Judeo-Christian foundation and has been blessed by the hand of Providence. I will stand STRONG for religious freedom against any attacks that may come it’s way.”

More from the Detroit News:

Written using the pseudonym George Rathburn, the sexually explicit email was received by Republicans on May 20 and 21, the two days following Courser’s meeting with Graham. The missive claimed Courser was removed from the House GOP caucus after being caught having “paid male on male sex behind a prominent Lansing night club,” among other claims. During the May 19 meeting, Courser twice read aloud portions of a draft email to Graham. Most of the sentences Courser recited match copies of the email sent to Republicans and obtained by The News. “Nobody’s gonna believe any of that,” Graham said about the draft email. “Correct,” said Courser, who then added: “No, they’ll believe some of it. They’ll believe some of it.” Courser does not explicitly say he wrote the letter, only telling Graham “it’s already written” and that Gamrat “agreed” with sending it.

Hit the second link above to listen to the audio files. (Tipped by JMG reader Rob)