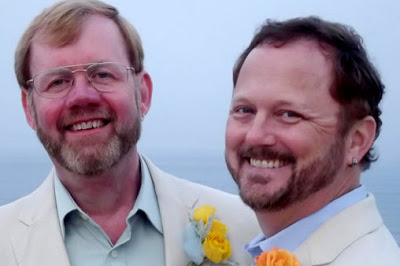 Quote Of The Day – Paul Hard

“Four years ago, this journey began in grief and pain. I am grateful that the courts have ruled that it will end in justice and equality for couples like David and me. I pray that equality for LGBT Americans continues and need not be won at the cost of sorrow and turmoil. I hope that this decision marks a new day for Alabamians and others in the public’s recognition of my marriage and a love that is equal to any other.” – Paul Hard (above right with his late husband), who last week finally won his legal battle against his evil former mother-in-law.

Hard was represented by the SPLC, who announced the closure of the case today. Here’s how it all started:

Hard, an assistant professor at a Montgomery area university, and Fancher were married in May 2011 in Massachusetts. Fancher was killed three months later when his car collided with a large truck on Alabama’s Interstate 65. Hard sued the trucking companies in a separate case not filed by the SPLC, and that suit was settled in July 2014. On the morning of the accident, when Hard arrived at the hospital in Prattville, Alabama, a receptionist refused to give him any information about his husband. He was told he was not a member of Fancher’s “family” and that gay marriages weren’t recognized in Alabama. Finally, a hospital orderly told Hard, “Well, he’s dead.” After receiving the traumatic news, a funeral home director cited Alabama law in insisting that the death certificate indicate Fancher was never married – even though Fancher and Hard were legally married in Massachusetts. Likewise, the state would not recognize Hard as the surviving spouse. Fancher’s mother, Pat Fancher, sought to be the sole beneficiary of the wrongful death suit proceeds, even though Hard was due a portion as the surviving spouse.

The mother-in-law was represented by the Foundation For Moral Law, which was founded by Alabama Supreme Court Chief Justice Roy Moore after he was first booted from the bench. Since Moore’s reelection the group has been headed by Moore’s wife, Kayla Moore. The SPLC has filed unrelated judicial ethics complaints against Roy Moore for his calls to defy the US Supreme Court’s Obergefell ruling.