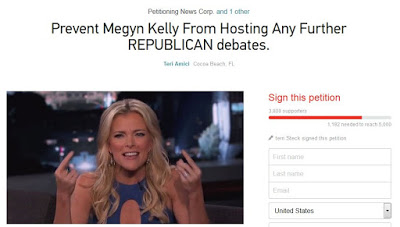 Megyn Kelly apparently finds the state of our union amusing and “fun”, whereas the viewers (our fellow citizens) deserve a much more serious moderator. In addition, she had a clear agenda to attack Donald Trump, by tenaciously clinging to his past rather than his vision for the future. She focused on Trump personally, rather than politically. Ultimately, she did not not live up to the “fair and balanced” slogan at Fox News and News Corporation. While her disdain for Mr. Trump was evident, this peititon is a call for truly fair and balanced coverage of ALL candidates. Thus, Megyn Kelly should be barred from hosting or moderating all future Republican Presidential Debates.