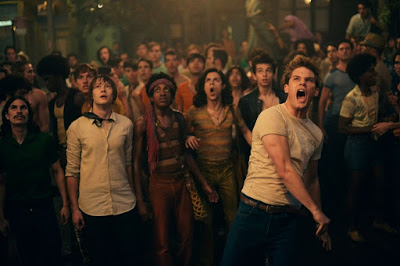 “A historically accurate film about the Stonewall Riots would center the stories of queer and gender-noncomforming people of color like Sylvia Rivera and Marsha P. Johnson,” a MoveOn petition reads. “Not relegate them to background characters in the service of a white cis-male fictional protagonist.” The trailer for Roland Emmerich’s film about the 1969 Stonewall riots just debuted online on Tuesday, but it’s already sparked controversy among the LGBT community for its portrayal of the start of the gay-rights movement. The preview presents a white man as the centerpiece of the movie, showing a character named Danny (Jeremy Irvine) arriving in New York City, where he meets the gay community on Christopher Street and is radicalized by his experiences with them at the Stonewall Inn. A MoveOn petition aimed at director Roland Emmerich, himself openly gay, urges those who sign it to boycott the movie “for erasing the contributions of of-color queer and gender non-comforming activists.”

So far the petition has over 14,000 signatures.

When I first learned about the Stonewall Riots through my work with the Los Angeles Gay and Lesbian Center, I was struck that the circumstances that lead to LGBT youth homelessness today are pretty much the same as they were 45 years ago. The courageous actions of everyone who fought against injustice in 1969 inspired me to tell a compelling, fictionalized drama of those days centering on homeless LGBT youth, specifically a young midwestern gay man who is kicked out of his home for his sexuality and comes to New York, befriending the people who are actively involved in the events leading up to the riots and the riots themselves. I understand that following the release of our trailer there have been initial concerns about how this character’s involvement is portrayed, but when this film – which is truly a labor of love for me – finally comes to theaters, audiences will see that it deeply honors the real-life activists who were there — including Marsha P. Johnson, Sylvia Rivera, and Ray Castro — and all the brave people who sparked the civil rights movement which continues to this day. We are all the same in our struggle for acceptance.

Previous Headline Of The Day
Next Taiwanese Animators On GOP Debate