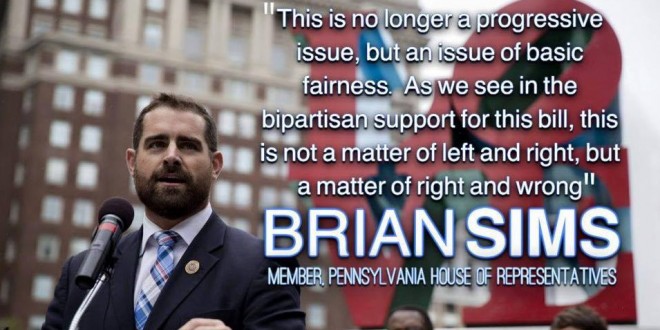 Pennsylvania Democrats are taking another run at a comprehensive LGBT rights bill.  Via press release from state Rep. Brian Sims:

“While Pennsylvanians have enjoyed the right to marriage equality for over a year now, we are long past due for equality in our discrimination laws. This is no longer a progressive issue, but an issue of basic fairness. As we see in the bipartisan support for this bill, this is not a matter of left and right, but a matter of right and wrong,” said Sims, who is co-sponsoring the House bill.

The proposed Pennsylvania Fairness Act would update the state’s current nondiscrimination law – originally written in 1955 – to ensure that all citizens regardless of race, color, religion, ancestry, age, sex, national origin, disability and now – sexual orientation, gender identity and expression – can participate in and contribute to the state’s economy.

It is currently legal in Pennsylvania to fire someone and deny them housing or business services solely on the basis of the person being gay or transgender. A recent survey of Pennsylvania residents showed that 73 percent incorrectly believe discrimination against gay and transgender people in the workplace and in housing and business services is already illegal. The same study found 78 percent of Pennsylvanians are in support of updating the current Human Relations Act to include protections for gay and transgender people.

The bill faces a tough haul as Republicans dominate both chambers of the state legislature.

PREVIOUSLY ON JMG: Over 100 Pennsylvania lawmakers including Sims cosponsored a similar LGBT rights bill in 2013. Late in the year the bill got a surprising endorsement from then-Gov. Tom Corbett, who was fresh off national scorn for comparing same-sex marriage to incest. Obviously, the bill did not advance.