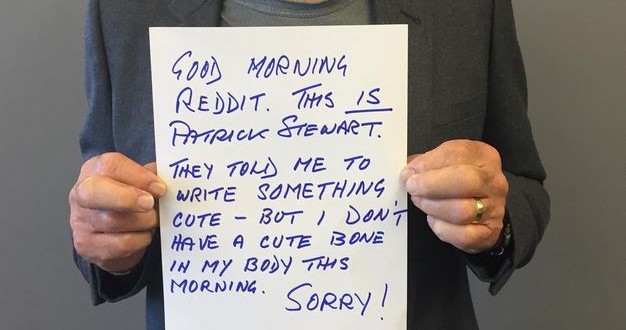 Yesterday Patrick Stewart took part in one of Reddit’s “Ask Me Anything” sessions. Via E Online:

Patrick Stewart is kind of like the Hollywood version of a unicorn. He’s a very rare combination of brilliant, funny, down to earth and most importantly, royal. Whenever you have the pleasure to be in the presence of Sir Patrick, you should count yourself as lucky. Which is why we knew that his Reddit AMA was going to be good. After all, his Twitter account is something of a masterpiece, and conducting an Ask Me Anything is basically one giant Twitter post. The actor signed up for his first Reddit foray to promote the premiere of his new comedy Blunt Talk, which sees him teaming up with fellow comedian Seth McFarlane. On whether Star Trek actor Jonathan Frakes is better with a beard: “With a beard, preferable, because it tickles when you kiss him.” On his worst habit: “Slurping when I drink…anything.” On hobbies he’d like to pick up: “Yes! Deep-sea diving and mountaineering. There’s something about going up and down that turns me on.”