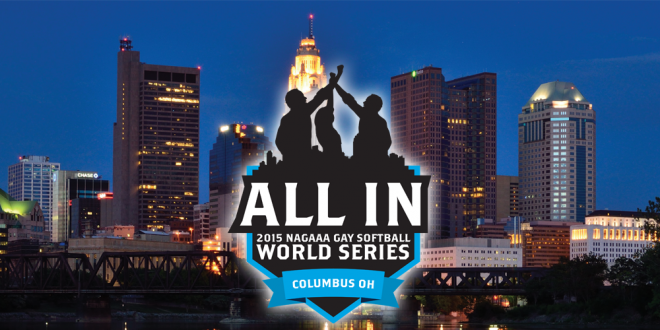 It’s not ALL about the Benjamins, but that’s a big part of it. Via Columbus Alive:

Before the first pitch is thrown at the Gay Softball World Series at Lou Berliner Sports Park, Columbus and the LGBTQ community have already won. For the second time, the largest annual LGBTQ sporting event comes to Columbus on Aug. 17, bringing with it 185 teams, roughly 5,000 participants from across the United States and Canada prepared for top-notch competition, and more than $5 million in projected revenue for the city over the nine-day event. “After Columbus hosted the Gay Softball World Series in 2010, people have high expectations for coming back,” North American Gay Amateur Athletic Alliance (NAGAAA) assistant commissioner Keith Speers said. “We raised the bar significantly in 2010, now we have to pole-vault the bar.” The Gay Softball World Series has garnered support from Mayor Michael Coleman and the Columbus City Council, Franklin County Commissioners, and a slew of corporate and local sponsors. Speers believes the outpouring of support reflects on Columbus’ progressive nature and a societal shift in how the LGBTQ community is viewed.

Top event sponsor Nissan is crowing on the Auto Channel:

“Nissan has the most diverse consumer base of any automotive manufacturer and is eager to champion grassroots LGBT events that give consumers a chance to interact with both our vehicles, and our LGBT and ally employees,” said Rick Ash, senior manager, Nissan Marketing. “It’s also an honor for Nissan to bring more visibility to out athletes (past and present) like Glenn Burke, Billy Bean, Sean Conroy and all of the LGBT athletes competing this week.” Since 2013, Nissan has scored a perfect 100 in the Human Rights Campaign (HRC) Corporate Equality Index for its LGBT-inclusive policies and commitment to the community. The company was among the fastest risers in the history of the index.

See the schedule of events. (Tipped by JMG reader Kyle)